A Sample Essay on a Common Essay Writing Prompt in USA 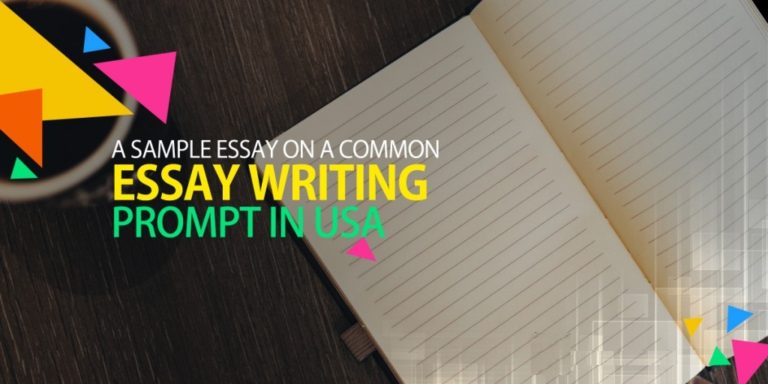 College essays are assignments that evaluate the candidature qualities of the students. These essays have three common aspects that every admission department of a college or university seeks. These three things would be the following:

So before you begin writing professional essays that you’re going to send out to the college of your dreams; you must think about a few questions first.

First of all, it comes to the choice of the prompt if the circumstances allow. While it is best to go with a prompt that resonates with the experiences you have had in your life to be able to write them well. The reason is, you have to write an essay outline before working on your essay.

But we suggest you the right prompt that can help you express with a subtlety that you will succeed without compromising your grades, and will not drop out of college midway. So get ready to be able to contribute a positive experience to the overall college environment including your teachers and peers.

We researched the most common essay prompts given by colleges in the USA and chose one which we believe could tick all the boxes about what an ideal college essay should have.

The prompt we have chosen is –

“Discuss an achievement or event, formal or informal, which marked your transition from childhood to adulthood within your culture, community, or family.”

The first time I read all the prompts to choose from I immediately knew that it is this one that resonates with me the most. I was always a rebellious teenager who would never listen.

I never did what people expected me to do, and since the very beginning of the time I started walking on this conundrum of chaos; it was in my nature to oppose what others expected from me.

But this habit of mine did not stem from an inexplicable love for battles, as I still like to identify myself as a peace-loving person. I rebelled because inherently I knew that whatever was prompted to me as expectations were never really justified.

It must seem so to all angry second-generation teens of immigrant parents being torn apart between contrasting cultures with double the burden of expectations and also double the challenges. Whereas in reality, an MBA dropout has also turned out to be a successful entrepreneur after sneaking out from his corporate life.

Getting pimples while being of a different color is not really a fun prospect for hormone-raging high-schoolers whose angst is only comparable to deadbeat poets and unrecognized writers or musicians.

Girls in my culture as like several other cultures were expected to act a certain way, to be submissive, to be devoutly religious and to never have a voice. Amongst our broader community argument was a bad word.

It is an infectious practice that must be condemned from the lips of children who dare raise their voice to opine on common day-to-day matters if their opinions differed from their families. Next day when I read about the 17 years-old kid working with NASA, it made me think otherwise.

To us, democracy was a myth in the household, being ruled by the man of the house and religiously followed by the alpha woman who would love to tear the wings of dreams apart from the little girl’s backs, because they were never allowed to fly themselves, so why should you?

In such a circumstance, it seemed to me that rebellion is the only choice I have. And I am happy to say that my mutiny emerged out successful with time and I have been able to explain to my community about the position of women and have been able to bring about ample change in their perception to move a step closer to gender equality and human rights.

But saying that would only be the half-truth as only revolting while being a reckless teen did not bring this change.

I had an elder brother who was also my best friend and confidant. Tragically one fine morning I woke up to discover that he passed away in an instantaneous cardiac arrest while trying to meditate! Initially, as I went through the five stages of grief, denial was an alarmingly huge part.

But surprisingly, I was a completely changed person after just 5 days. My family thought there might be something grossly wrong with me and maybe they should make me get some help.

For whatever reason it may be, his death made me realize that anger is not the only weapon I could use. This instant softening change of my ways scared the people around me, but as I ripped the layers of mind-numbing anger and let compassion pass through the crevices, things around me seemed to lighten up.

Communication was no longer a problem as people instead of cringing at my voice wanted to hear more of what I had to say. Although it seemed terrifyingly different, then again it was said with love and a deep sense of responsibility; this sense of responsibility did not only come for the causes and principles I stood for, but also for the holistic good for the people and for myself.

My brother’s untimely death was a wake-up call to outweigh my hate spewing mind and let my compassionate heart flow through. And as dramatic this whole essay may seem getting over my confusion and anger with the sudden death of a beloved family member is something that made me an adult over a course of only a few days.

I found myself taking on more family responsibilities immediately the next day, and discovered a sense of self that was probably hiding within me all the time. In fact, money management was pretty sorted in my case after I learned how to implement the right tactics in the process called living.

Now I still stand for the same principles but only my way of communicating them is not as confusingly aggressive from the very beginning. And I believe that my improved communication and writing skills will further enable me to make a positive impact on my peers at your esteemed institution and also on others to bring about optimistic change into my future pursuits.

For more buying essays online, feel free to drop by our site at PenMyPaper.