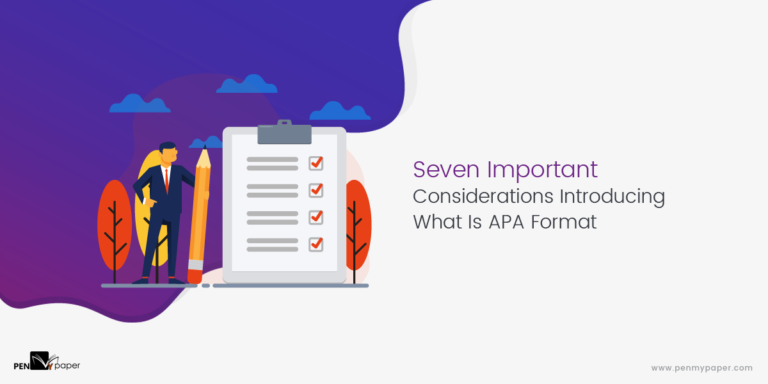 Before getting into what is APA format and its rules, you must comprehend the reason behind its incorporation in paper writing. According to the American Psychological Association, formatting a paper is a vital practice. Your grades and quality of the composition, largely, depends on a paper structure. Though there is quite a few outlining styles, APA tops the popularity list, with some unique formatting regulations.

Stances That Perfectly Present What Is APA Format

Here, you will find the list of significant rules that uniquely identifies APA format. Check the rubrics and incorporate them in your paper, if the university guidelines ask for it.

1. APA Format Has A “Five-Level-Heading” Rule

If you have organized the paper in APA format, a veteran can judge it by the headings. In the five-level structure, each level has a unique style. Here they are –

Level 1: This is the title of your paper hence largest in size, Bold, aligned in the center, with title case capitalization (Capitalize Each Word).

Level 2: It is the second heading hence smaller than level 1, placed against the left margin, Bold, with title case capitalization (Capitalize Each Word).

Level 3: Being the third in structure, it will be smaller than the previous two, placed at an indent from the left margin, Bold, with Sentence Case Capitalization (Only the first word).

Level 4: This will be identical to level 3 with the slightest difference in size. And, it should be in Italics.

Level 5: Identical to Heading 4 and the smallest in the list.

2. A Person Is Prioritized While Writing His/her Orientation or Attribute

APA format says an individual should be put first while describing his or her attribute. According to the orientation rule of American Psychological Association, the concerned person should be highlighted. Example: Instead of writing “Cancer patients,” say, “Patients who have Cancer.”

3. APA Papers Are Always Devoid of Narrower Terms or Biasedness

While reading a paper if you come across some sort of biasedness, labels or constricted aspects, then it is definitely not APA formatting. Broader terms like “subjects,” and “participants” are used in an APA formatted paper rather than “elderly,” and “adolescents.” Also, gender equality is highly valued in this formatting style. While addressing to female subjects, terms ending with “man” or “men” are strictly avoided. You cannot find any trace of ambiguity all through the paper. Example: Addressing like “Firefighter” is done instead of “Firemen.”

4. You Can Never Find Racial Discrimination’s in APA Formatted Papers

The APA instruction set specifically indicates avoiding any form of discrimination. Be it someone’s ethnic identity or race or any sort of sensitive ideology, the label falls under census category. The term must begin with Capital letter for expressing esteem and revere. Words like “minority” should be cut out as it may be interpreted as disrespect or indicate a deficiency.

5. APA Has A Unique Thumb-Rule for Addressing Demographics

Referring to subjects differ with ages in APA referencing style. Good quality papers always preserve the addressing style in order to maintain a balance. Check the rules before you format yours –

Note: Violations are treated as misconduct.

6. There Are Three Distinct “Abbreviation” Rules in APA Formatting

Sparingly use the acronyms as too much usage is considered as exploitation and it badly affects the readability attribute of the paper. Use only when it is necessary following the subsequent rules.

Note: Spellings of the acronyms should be the same as written in Merriam-Webster’s Dictionary.

In case, you fail to follow these important considerations, then opt for professional assignment help from PenMyPaper.

7. The Reference Page Structure Has A One-Off Style In APA

Here, you will find the integral rules of APA referencing found in examples. If the paper you are reading highlights these practices, there’s no doubt the paper is written in APA format example. Now, take a look at the outlining instructions for the Reference page –

Even in your paper, uphold these guidelines. If you are facing any sort of writing challenges in the process, seek help from experts rather than compromising with the quality. PenMyPaper is your one-stop-solution to get paper writing help, as it offers no plagiarism paper writing service at economical charges. Here, experts bring in the best custom-made drafts within the deadline.